Well John, You said you needed to reach out to the developer to see. What did you find out? I've looked into switching to another program just for the time clock. Up till now there's only 2 things keeping me from switching. 1) Your empty promises. 2) It would be such a pain to switch and learn a new program. As much as you don't know just being "The Messanger" I'm sure you know more than your leading on. Either you know it's on the back burner or you have a idea of when it's coming out. A company doesn't spend 3 years and still not know whats going on.
Top

I have to agree. This is ridiculous at this point. Just give an answer one way or another!
Paul
Pauls Automotive
6318 Falls Road
Baltimore, Md 21209
410-825-2224
paul@paulsauto.com
TRUE HAPPINESS IS WITHIN YOU
Top

Yes. Three years is along time to wait for a time clock solution that will need to be built from the ground up.
I held off with my response knowing that a new feature was being added over the past few weeks. That being, giving shops like you a direct path of communicating what features you would like to see added and developed to the BOT Software through voting on those items you want.

You will see, if you haven't already, a new icon in Report Pro that allows shops using our products to suggest and vote on options they would like to see added to the software. At this point, you basically get a chance to vote on the items listed. I was waiting for the second release of this that would give you shops the ability to make more suggestions, comments, and add other pertinent information for your requests. I don't have a date of this update.

So do I have the answer to the question of a time clock being added? I don't. But with programing developing this voting system, I think you can expect that this request can be given much more weight than the seven shops I think I counted on this thread, and the 36 votes already listed voting for the time clock feature. Expecting having this put in front of the thousands of shops out there using the BOT products, they too will vote for this request garnering the attention needed to finally move forward on time clock and other features requested by our users. 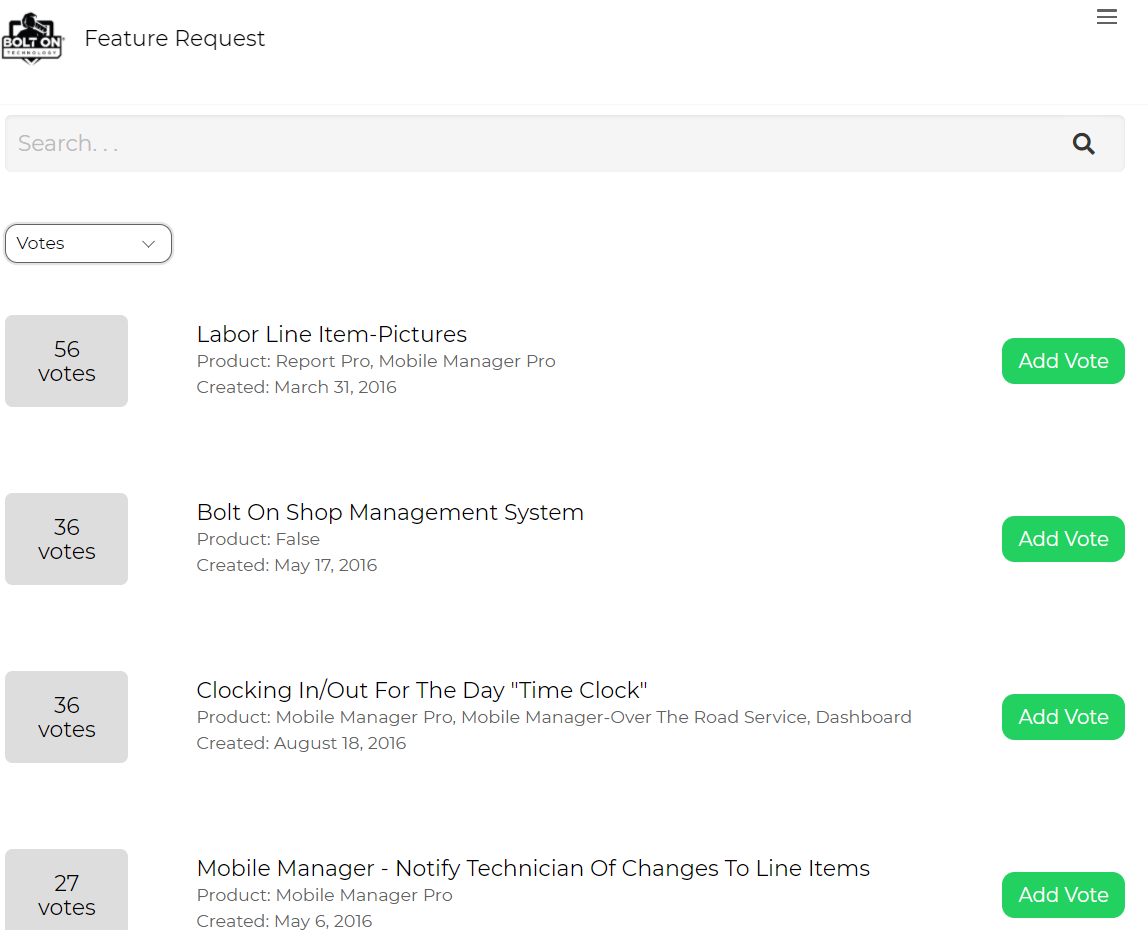 You want to know how many times I've went to the "Help" button in the last year? NONE.... we have work to do not play your silly little games. You've very specifically told us it was coming and now your basically saying you need to find out how many people really want it. We'll at least you've really told us what kind of company Bolt on Really is....I can take this info and simply move on. I've had enough of your BS.
Top

According to the poll, the time clock is the second highest requested item. The number one I believe is already in place, which makes time clock number one? Highest priority? Asking for a friend.

ricmorin wrote: ↑
Mon Dec 07, 2020 7:46 am
According to the poll, the time clock is the second highest requested item. The number one I believe is already in place, which makes time clock number one? Highest priority? Asking for a friend.

Well, I'm 47 years old and I've come to the conclusion that I'll be retired before they get this done. Looks like we'll be finalizing the plans to go to Protractor by the end of the year.
Top

Anyone know when the celebration is? November 14th will be the 4 year anniversary of this request that was supposedly happening.
Top

Still the number 2 most requested item, and all we get are crickets.