Based on my experience it would appear the Mobile Manager cannot handle multiple instances of the same part number. In Manager, when such a condition exists, you get a window to choose from. In MM all you get is the first instance. Is this a known condition and will it be addressed in the future?
Ric Morin - Volunteer Forum Moderator, Shop Owner, ASE Master L1
Motorcar Alternatives, LLC
603-622-6434 x203
www.motorcaralternatives.com

I'm not sure I am understanding you.
Are you saying that if I put part A1 into MM it will not let me put A1 in again?

If you have multiple A1s, quantity is being used like 5 A1s? 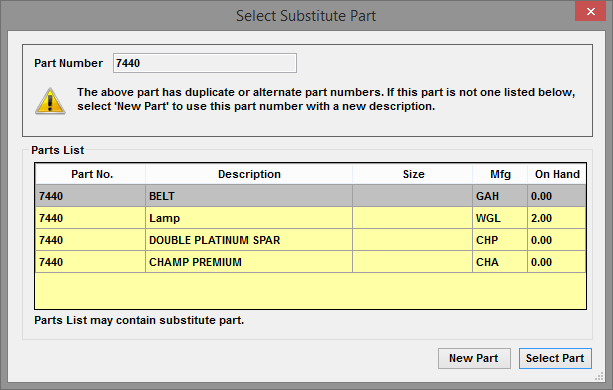 Ric,
Thanks for that, I now understand.
But why enter the same part number four times to represent four different parts? That seems to be were the issue starts.
My method would be to add another digit to the number. Looking at your example BELT would be G7440, lamp - W7440.....[Second thought BELT would be B7440, lamp L7440]

Approximately how many duplicate part numbers do you have?

Seeing that the Mitchell screen, that you pictured, pops up asking about the a duplicate part number, I figure that their may be a common issue with this.
I'll in put it with the cursor request too.

Because of the extra window, I think that this will require some reasonable programming. I don't know.
Thanks again for the input.
John Burkhauser
Director of Educational Programs

These parts represent 4 different items. In order to get these from their respective vendors electronically the part numbers must be exact, as does the line code. Changing the part number is not an option. Mobile Manager should be able to handle this like Manager SE does.

When dealing with 15 electronic vendors, there are going to be duplicates. This is a fact of business in this day and age. How our software handles this condition defines the top players. I've always considered Bolt On as a top player.

Ric,
When I see the whole story it makes sense. I'll put it in the suggestion box as I have your other requests and wait for programming to see what they can do.

Thanks. I'll try to be clearer in the future.

Thanks.
Sometimes can be a bit dense.
John Burkhauser
Director of Educational Programs

Any word on an update for this? Any time we have multiple iterations of a part we're unable to use Mobile Manager for entry.
Ric Morin - Volunteer Forum Moderator, Shop Owner, ASE Master L1
Motorcar Alternatives, LLC
603-622-6434 x203
www.motorcaralternatives.com

Ric,
I will check and let you know.
John Burkhauser
Director of Educational Programs

Ric,
Sorry for the delay in getting back to you.
Looks like I dropped the ball on this request way back when you asked for it. I didn't enter it or did not complete entering it.
I entered it today and went back to the programmer and let him know so hopefully it will be done sooner than later.

I am sorry for not getting this done originally.
John Burkhauser
Director of Educational Programs

No problem. It's not like this issue is a deal breaker, but I'm sure you'll agree that Mobile Manager should handle parts as well as Manager SE does.

While we are on the subject, I discovered another issue today.....

When scanning a part using Mobile Manager, users are unable to enter a fraction of a part. If I sell a half a quart of oil and I scan the number, the program will not let me enter anything less than one.
Ric Morin - Volunteer Forum Moderator, Shop Owner, ASE Master L1
Motorcar Alternatives, LLC
603-622-6434 x203
www.motorcaralternatives.com

Got it.
John Burkhauser
Director of Educational Programs

It's still in for being dealt with but has not been as of yet..
John Burkhauser
Director of Educational Programs

You can add another issue while you're at it. In addition to the duplicate part numbers and poor handling of fractional scanned parts, it appears that Mobile Manager cannot handle alternate part numbers when linked to several parts. Really?

If I have an alternate part number that links to several stocking parts, Manager provides me a list to choose from. Mobile Manager just chooses one; usually the wrong one but you'll never even know. Not a way to run a business.